The 29 Hand in Cribbage

The highest possible hand at Cribbage is 29 points (shown above). It comprises all four 5s and the Jack of nobs. It is extremely rare to score a 29 hand in cribbage. In tournament play there is usually a special award for a 29 hand, whether it be cash or merely glory.

How to score the 29 hand

We love to hear your stories about 29 hands or other interesting cribbage experiences! See the Your Stories page, or contact us with your own story.

What are the odds of getting a 29 hand in cribbage?

See the Odds of a 29 hand in cribbage page to find out the exact odds of scoring this perfect hand. 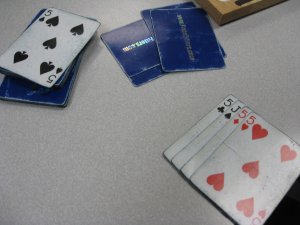 I had a 29 hand yesterday (picture right). Two hands later my opponent had a 28. I ended up losing the game, and actually there was a chance I would have been skunked if I didn’t have a 20 point hand towards the end of the game.

Adam’s own workings suggest that the likelihood of actually being able to score a 28 and a 29 (as opposed to being dealt them) is about 1 in 10 million (often the last hands of a game are not scored as one player has gone out). But how surprised should we be about such an occurrence?

If we consider only officially sanctioned tournament play in the United States, there is a tournament somewhere almost every day, so let us say 365 tournaments a year of about 30 games each. So we would expect to see about one 29 hand a year in tournament play. I don’t have the actual figures, but that sounds about right.

But a 29 and the 28 in the same game are a thousand times as improbable, so we would expect this to occur in tournaments about once every 1,000 years.

It is impossible to know how many games of cribbage are played every day, between friends and families and pubgoers. But there must be thousands of times as many unofficial games as there are tournament games. So we could estimate that a 29+28 combination occurs somewhere in the world maybe about once a year.

My dad’s friend was playing partners cribbage, they ended up on the 120th hole and the first person to count had a 29 hand and was able to count it. I looked online but couldn’t find anything on the odds of scoring a 149 game. This was done in league play a few years back in Ishpeming, Michigan. I was curious on the odds of this. It must be super rare.

I never heard of it happening before, but perhaps you have? Let us know! Comment Below!